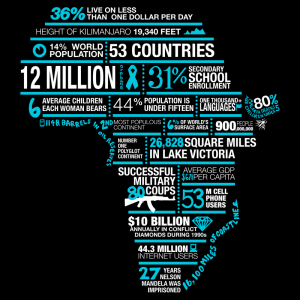 The African countries are confronted for several years with the problems of underdevelopment and the governments (in place) put themselves ready to work and secure the living conditions of the future generations.

However, in many countries, the development is a question which returns in the conversations and which is always handed in the hands of the State which has more and more difficulty to contain the height of population.

So, how long should we wait before the development arrives? Will this reach all of our communities at the same time? How many years still so that in the African countrysides there is some light (electricity) everywhere? Even less internet? How long will it take to youth in Africa to access quality education? What type of job may they have?

A group of young Cameroonians thus decided in 2006 to set up an organization which will be officially legalized in October, 2008 in the objective to contribute to the global efforts of reassurance of the living conditions in our communities in Africa. The Name was created as Web and Development Foundation with a short name WEBDEV FOUNDATION.

The Previous Logo has being changed to fit the major update occuring in the organisation. This logo was to simple and had no real meaningfull to those who were seing it. The Logo weren’t express the real action carrying out by the organisation and was not relevant for our image.

While working for the summer 2012 Project, we found that the logo need to be adapt and fit the new orientation

of the organisation. The logo had to reflect the impact we want to have in the society. So we come out with the new one beside this text.

So from February 15th, 2012 the new logo is used for all of our documents, websites, facebook, youtube, communictaion materials…

Orange: Orange combines the energy of red and the happiness of yellow. It is associated with joy, sunshine, and the tropics. Orange represents enthusiasm, fascination, happiness, creativity, determination, attraction, success, encouragement, and stimulation. Orange increases oxygen supply to the brain, produces an invigorating effect, and stimulates mental activity. It is highly accepted among young people. As a citrus color, orange is associated with healthy food and stimulates appetite. Orange is the color of fall and harvest. In heraldry, orange is symbolic of strength and endurance.

Blue: Blue is the color of the sky and sea. It is often associated with depth and stability. It symbolizes trust, loyalty, wisdom, confidence, intelligence, faith, truth, and heaven. Blue is considered beneficial to the mind and body. It slows human metabolism and produces a calming effect. Blue is strongly associated with tranquility and calmness. In heraldry, blue is used to symbolize piety and sincerity.

Black: Black is associated with power, elegance, formality. Black denotes strength and authority; it is considered to be a very formal, elegant, and prestigious color. Black gives the feeling of perspective and depth.

The 3 people: represent communities arround the world. Together they achieve more and are very strong.

The Wings: the two of them are meaning of connexion, no mater the distance and the dificulties. We have a foundation of those two wings have a foundation that relies on people, the same as the orange circle in the middle that symbolise the World.

The foundation name which is written in parallel, symbolize equality between peoples from all over the World. The blue color mean trust, stability, wisdom and the orange color energy and happiness that all shoud have.