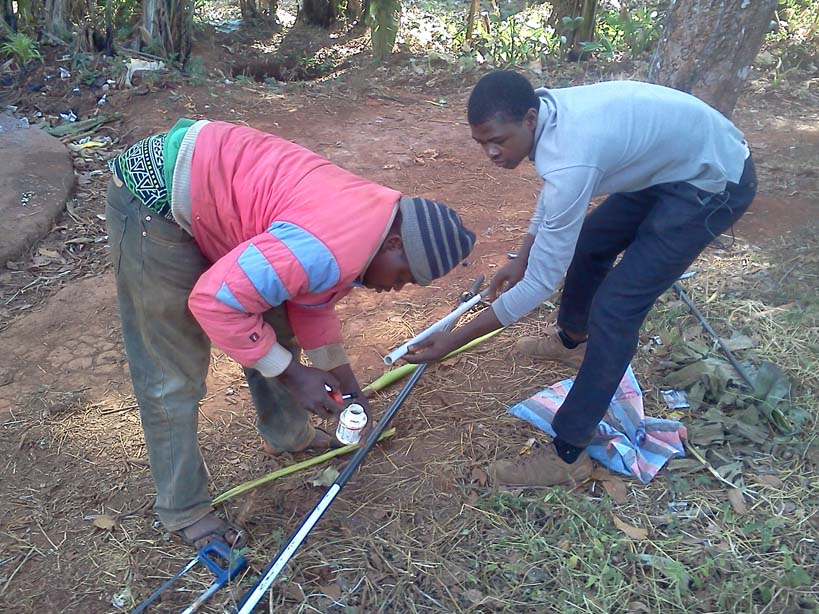 Three days was the time for the maintenance of the 7 drinking water systems installed in Bangoua in the 2 most popular districts of the Group. It is a project initiated by WEBDEV Foundation and its partners to help solve the problem of lack of water in the locality of Bangoua.

Indeed, from June 27 to 30 2019, a team made up of a member of the WebDev Foundation (from technicians trained in October-November 2017) and 2 technicians resident in Bangoua carry out this mission, which aimed to update all water systems previously built in this locality between 2017 and 2019.

The initiative is motivated not by the will of the local populations desperate for the lack of water and because of the financial inability to meet the costs of maintaining their water system although very accessible, because the expenses are rising at just over 15,000 CFA francs per system for maintenance and the salary of technicians included.

Never in this locality such a system could be maintained with so little money, but the socioeconomic conjuncture of these last years in Cameroon arrive in the most remote corners and hurts very much.
But the technicians have not lost faith and have used the workshop that has been rented since 2017 to refine their research and make discoveries that are worth spending a little time on.
Indeed, the research made it possible to solve one of the major problems of these systems which consisted in the use of the fronds to support the main conduit which brought water to the surface, which made that by pumping, the system could not resist the blows received for a long time. Armed with this new technique which now makes these systems sustainable for the benefit of owners, the WebDev Foundation team will carry out this three-day mission.

06/27/2019
• Behind the Kamna Market, this point is a rehabilitated well for a Nonagenarian. The team replaced the foot valve with a new one and remade the piston junctions.

• In Kamna, this public access and use well has two pumps installed. It is the only public well in this desert district because it has no rivers. On site, the team designed two piston valves with PPR pipes to replace the old ones made of exposed electrical pipes, replaced the pressure piston pipes with PPR, welded the sleeves and cleaned the area around the well.

06/28/2019
• Rainwater collection system located near the Bangoua Heritage House in the Tougong district. The team designed a piston valve with PPR pipes to replace the old one made of exposed electric pipes, drained and washed the tank, replaced the pressure piston pipes with PPR, cleaned the surroundings of the tank.

• The team also carried out a visit to the probable site of a rainwater harvesting system installation and design of the implementation budget (the tank having already been dug).

06/30/2019
• In Naah at the neighborhood chief’s, here the WALI Bangoua team had installed a rainwater collection system. The team replaced the entire piston, replaced the outer part of the filter (50 pressure hose) with a galvanized hose and immobilize it with concrete, re-glued the gutter and other basic maintenance tasks.

• In Toutchack (a suburb of Kamna village), in a large family, the team had built and installed a manual borehole there. She designed a piston valve with PPR pipes to replace the old one made of exposed electric pipes, replaced the sleeve of the piston,
reinforced the part of the external pump with concrete.

It is with joy that this work is completed to the extent that the functional tests have given satisfaction.

It should be noted that during the progress of the works, the team had the visit of the district chief Kamna and that of the King, SM DJAMPOU TCHATCHOUANG Anick Julio, Superior Chief of the Bangoua Group, came down to inquire about the situation and motivate the team to move forward.