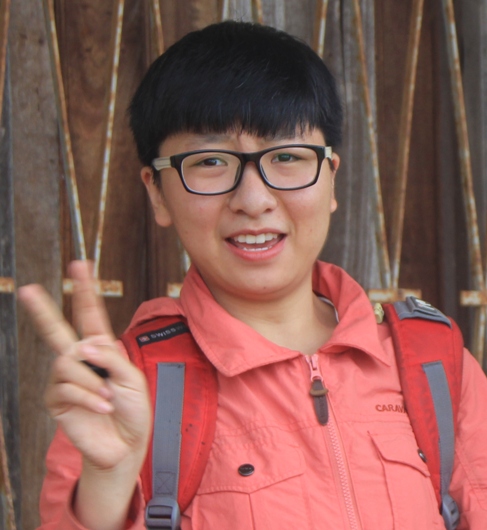 I am Asan Li, I arrived in Douala, Cameroon in 10th , July,2014 and began my EP trip. It took me more than 6 hours from Douala to my intern village: Bangoua, which was located in West Cameroon. At the very start, I was scared by the total strange environment, congested bus and language obstacle. However, after reaching Bangoua, everything became good. People in Bangoua were always well-mannered and kind, you could show your smile and said Hello to every stranger. And the landscape here was also awesome, I witnessed the rainbow crossed a valley, countless stars and the Galaxy in the sky, and colorful blossoming flowers all over the plains.
What was more, I was so proud that God sent several outstanding colleagues to me. They were Clotair, my TL; Manuela, Shandy, Aristide, Gustav, Franklin, five interested Cameroonian; Stefan, a handsome Romanian boy; Clara, a brave German girl; Anna and Juana, two Columbia girls; finally, my compatriots Miranda and Sean. We constituted a big family.

YOU COULD DO EVERYTHING WITHOUT FRENCH
My work was teaching basic Chinese, English and organizing extra activities to children in the morning, basic medical English to local doctors in the evening. Sometimes there would be some bonus Chinese lessons for teenagers. There was no denying that one of the biggest challenges was that I could not speak any French. Thanks to my warm-heart Cameroonian colleagues Manuela and Shandy, they always did the translating job in my class without any complaining.

Every day in my internship was interesting and different. Children in my class were curious, energetic and creative. They had the strong desire to show themselves, especially facing my camera. Children’s nature was to play, so it was a neither too big nor too little challenge to create a quiet atmosphere in the classroom and let them remember what I just said. Sometimes they could not draw attention or could not help talking. So I tried my best to burn their fancy and make the lesson more amusing. For example, Manuela and I let them to draw a person after we taught English characters and numbers. At the same time, the element in their pictures should be what we impacted them in my class. Exceeding my expectations, their works were full of imagination and creativity. Miranda and I would play instruments to these young students if we had free time. Reward and courage was also very significant, every time children finished the task we would give them some cute pasters for reward.

As you can see, football was the soul of Cameroon, all my students, boys and girls loved football. Maybe you could not image that kids ran so fast on uneven and muddy playground with their old-shabby slippers, kicking a toy ball. I tried to jion in, but could not even touch the ball in every game.
All students of the night lesson were adults, so it was not easy to teach them. Medical English was a brand new field for me, every day I spent lots of time to collect useful information for the PPT, but every lesson they would point out some mistakes. In fact, it was an important part in the lesson. All of us could acquire new knowledge and became each others’ teachers. My “big” students were outgoing and interested in interacting with me. I would make up some conversations between doctors and patients and asked them to play a role in. They regarded conversations as a fascinating game and always got fun. Some of them even wanted to learn Chinese, in contrast, they taught me a little bit basic French.
YOU COULD NOT DO ANYTHING WITHOUT FRENCH
As I said that earlier, it was not easy for me to live in a French speaking country. You could be beat easily by some small stuff. For instance, I wanted to buy a bottle of Cola in a small shop. However, the owner of the shop and I could not get each other. After lots of disordered gestures, I went out with a bottle of juice.
Particularly in our work, I could not do anything when Shandy or Manuela were absent. Most of children here could not speak English. In August we had a medical project, which every volunteer had to serve in Bangoua hospital and communicate with patients. It was a piece of cake for Anna, Juana, Clara and other French speaker but a big difficulty for Chinese guys. The whole day we just say Hello to patients with “Frenlish” and embarrassed smile. At the same time, Juana has registered more than patients and got their temperature data.
SEE AND UNDERSTAND DIFFERENT CULTURES
Cameroon was composed by more than 200 kingdoms. Every kingdom had different tradition and costume. I’ve seen 3 kings and visited several kingdoms. Fortunately, my colleague Manuela was a daughter of the king of Babaouantou kingdom. We were invited to attend the “notable people celebration” of this kingdom in 17th, August. I got a wonderful chance to feel Cameroon culture and participated in the celebration. In the morning, some kind old ladies taught me how to peal cook-plantain in their traditional kitchen. After a hearty lunch, we witnessed parts of the mysterious ceremony in the celebration: a notable person was surrounded by her family members, they played traditional song and dance together. Then the notable people began to give out “lucky salt” and “lucky rice” to participants. In the evening we went through to the rain forest for night party. Everything was so interesting and attracting to me. What was more, I got so much valuable information for my studying area: archaeology and anthropology.

DO A LITTE “MAGNIFICENT FEAT ”
Other friends and I decided to donate blood in 19th, August. It was my fifth time to donate blood. At the beginning of blood donation, something wrong happened: doctors could not get any blood from my blood vessel, they tried so many times that my arm began to swell. Lucky, finally I donated 450cc blood successfully. I was very happy that my blood would save someone’s life.
TRY A BRAND NEW LIFE
So many guys asked me, why I choose Cameroon. My answer was: everything in Cameroon was different from China. I could try a brand new life, took a rest from my daily university life and touched the world outside, joint in another people’s at another corner in the earth. And then, that was what I wanna say to all guys who want to be a global volunteer in Cameroon:
Don’t hide your smile: Cameroon is a place where you can feel the kind and gentle relationship among people. Strangers will greet you on your way home, in a small bar, or at the corner of street. So just show your smile to everyone you meet.
Remember every unique moment: Maybe you can’t find another chance to share a TAXI with 12people, grind peanuts with stone millstone, take motorcycle and “fly” on the small muddy path, taste “weird” fruit, dredge sewer for a king, watch “star sea” in jungle…treasure every moment in Cameroon, and it would be your unforgettable experience.
Forget who you were: Try to do everything new and to be a real Cameroonian. You can play drum with children, eat conventional breakfast with French bread, order a bottle of beer in bar and dance with African music…